My son is learning about integers at school. It is quite a challenging topic to come to, especially as, thus far, for him, trying to understand it purely based on the familiar is both a necessity and a tough challenge due to the novelty of the idea.

First off, it is not a big deal if kids are unable to grasp integers initially. They eventually do, but given that integers weren’t “natural” enough to be invented for millennia1, it is perfectly normal to not understand them from the get go. Coming up with negative numbers is like inventing a new piece of mind technology.

How do you explain the principles of integer arithmetic to a young mind? In particular, what would constitute an explanation of the rule M - (-N) = M + N?

The challenge in coming up with an explanation is that there are some constraints to meet.

Brahmagupta (598 AD - 670 AD) apparently used the terminology of fortune and debt to label positive and negative numbers when he articulated the rules of calculation with them.2 From that, we have -

“A debt subtracted from zero is a fortune.”

In other words, if you take away the debt that someone owes someone, you’ve essentially given them a fortune. This is understandable because if you give someone a fortune, you know they can clear their debts with it. So giving someone a fortune has the same effect as taking away their debts. This is similar to the system used in China to keep track of spending.

While it is an ingenious step to generalize debt and fortune in this way, I’m not satisfied with this as a way to understand integers - the negative kind - for several reasons -

Much like the way physicists originally thought of anti-particles as the absence of particles from an infinite invisible sea, physical analogies like this … kind of suck. I was never satisfied with the particle/anti-particle pair creation myth that the anti-particle is like the empty hole in a sea of energy that the particle got separated from, or however it is stated. It doesn’t work for me because I’m not sure that way of explanation is useful in any other way - i.e. it isn’t a perfect analogy.

I attempted another one in the same spirit nevertheless, using a bowl of dense yoghurt - or “curd” in South India. If you scoop out some curd from the bowl, leaving behind some empty space, it amounts to subtraction. If we instead describe that same activity as “adding a scoop of empty space to the bowl of curd”, we’re beginning to approach the notion of negative numbers. So how do you then “take away a scoop of empty space in the bowl”? You do that by adding an equivalent scoop of curd back in. 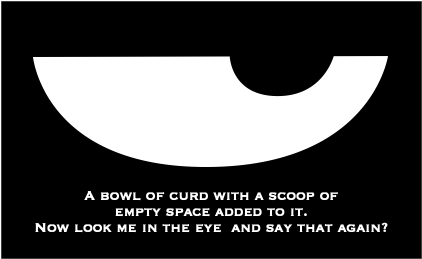 It is possible to “explain” using rules again, but that, as noted earlier, is not acceptable, since it doesn’t meet the criterion of familiarity.

This is a variation on the number line, but with the additional introduction of arrows. The number “3”, for example, is expected to be looked upon as an arrow with its tail at 0 and its head at 3. You can shift these arrows about, but you got to start somewhere.

To add two such numbers, you shift the arrow of the second number such that its tail coincides with the head of the first number.

In the above picture, you see 3 and 4 making 7. It shows both the addition and subtraction rules as pointed out in the pictures below.

Now, what if we try to add an arrow that is pointing leftward? From the picture below, we can see that it is effectively the same as subtraction, and serves to illustrate 7 - 4 = 7 + (-4), where -4 is represented by a left facing arrow of length 4. We’re adding -4 since we attached the tail of the left pointing arrow to the head of the 7 arrow.

Now that we’ve established -4 as a left pointing arrow of length 4, we can subtract -4 from 7 by aligning -4’s head with the head of 7. From the below picture, we see that we land at 11 at the end.

This one is by far the most satisfactory one for me. The mapping goes as follows -

With this much, you can do regular arithmetic. If you’re keeping track of numbers on the number line in the direction you’re looking, you can somewhat understand already that there are positions before where you began and you can label them with negative numbers. However, that is not yet it.

So the entire problem of explaining this seems to hinge on creating mappings for these two meanings of -.

The egocentric movement is a close analog of the line number and arrows approach above, but is rooted in our bodily experience instead of an external construct.

If we give up the need to deal with arbitrarily large numbers, there is something interesting we can do with clock faces that illustrates the concepts of negative numbers and subtraction while working only with positive numbers and addition. Now, that’s interesting because it can introduce the concept while staying within the confines of what is already well understood. So we’ll put aside the loss of the infinite and look at the finite for the moment. While this “explanation” is rather long, it has the benefit that this domain can be exhaustively explored.

So here is the clock face with numbers counting from 0 to 11 in the … clockwise direction. 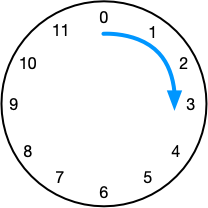 There is nothing special about “clockwise”, so we’ll also number the points in the opposite “anti-clockwise” direction too. 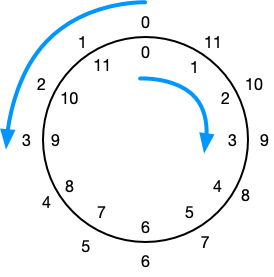 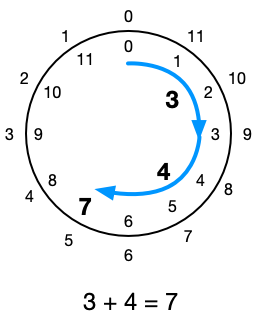 Eek - we’re moving in the anti-clockwise direction inside the clock and we don’t want to deal with subtraction. So how do we get to 3 without subtracting? We notice that on the clock face, we can add 8 to 7 and get to 3. In fact, to find out which number you got to add in order to have the same effect as subtracting it, you just pick the outside number corresponding to that number. In this case, the outside number corresponding to 4 on the inside is indeed 8. 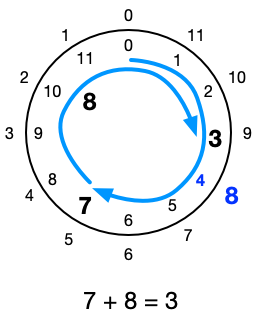 Yes. Agreed. Modulo arithmetic is probably complicated to teach when just introducing integers. But then again, I think kids should be introduced to modulo arithmetic first instead because we encounter more instances of that, right from the use of the place value system. The clock face approach can make for some great free play though since it can be exhaustively explored.

Of the above, my personal favourite is the egocentric movement analogy due to its ease of mental execution, followed by the number line + arrows representation. The clock face arithmetic is loads of exploratory fun though.

It is no surprise that the concept of negative numbers eluded our best minds of many millennia and continued to make more recent bright minds uncomfortable about it. No wonder complex numbers had a tougher history, but we’ll deal with that when we come to it!